Have you ever wondered how your favorite YouTubers are able to get silky smooth videos, even if they seem to be walking or running?

It’s not like they have any special cameras, but rather, a special camera accessory called a gimbal. In this post, we’ll talk about what is a gimbal, how it works, and why you may want to buy one.

Once you set up a gimbal, it uses motors to essentially cancel out any unwanted movements, making it seem like the video is smooth.

What makes gimbals so handy

A gimbal(also referred to as a brushless gimbal) is really good at producing silky, stable, smooth video. Though gimbals are newer developments, you rarely see camera shake in older movies, even in action and chase scenes.

That’s because the precursor to the gimbal was something called a Steadicam. Steadicams were complicated, since they used a lot more moving parts and you’d have to be trained in using one. They’re still used today in many professional filming situations.

Gimbals, on the other hand, are much cheaper, lighter, and geared towards everyday users. You don’t have to be a professional filmmaker or cinematographer to use one!

How does the gimbal work?

Accelerometers used to be quite expensive but they’ve since become really cheap and a lot of devices from video game controllers to mobile phones use them.

If you’ve ever played the Nintendo Wii, the way the Wii was able to detect the speed and direction you swung the remote was through accelerometers. This is the same technology your phone utilizes to know if it’s in landscape or portrait mode, too.

In addition to the sensors, the gimbals have very efficient and quiet brushless motors(hence the name brushless gimbal). The brushless motors are able to make micro-movements to each of the three axes that counteract any movement detected by the IMU, resulting in all camera shakes being cancelled out.

It’s really simple when you think about it! If the IMU detects a 5 degree movement in one direction, the computer directs the motor to turn 5 degrees in the opposite direction, cancelling the movement out.

The whole process happens so fast that you can’t notice any lag with your eyes in the resulting video.

This form of stabilization is present in nature, too, and the results are both stunning and cute!

When shopping around for gimbals, you’ll see three terms thrown around:

These are the three axes that a camera can rotate on, and the gimbal will cancel out any movements on these axes.

Pitch is when the camera tilts up and down, like you would move it if you wanted to transition from the sky to the ground.

Yaw is when you pan or turn the camera left and right as you would if you wanted to transition from one corner of the room to the other.

Roll is when you rotate the camera from landscape to portrait and vice versa.

As you may imagine, pitch and roll are the two movements most people would like to cancel out, so 2 axis gimbals will cancel out pitch and roll, but they won’t cancel out yaw. This is going under the assumption that if you’re panning the camera left to right, you’re probably doing it on purpose.

How to use a gimbal

There’s just one thing that you need to take care of before using your gimbal. When you put your phone or camera into the mount, it is ideal to balance the camera or phone as much as possible before powering on the gimbal.

It’s also super important to not power on the gimbal unless you have a phone or camera mounted! The gimbal motors are sensitive and can easily overheat.

Upon powering up the gimbal, you’ll generally have a choice of modes. You can either choose to lock all axes, or keep one axis following your movements. This is useful if you are not going to keep the camera in one position and you want to pan from left to right or tilt from top to bottom.

If you don’t relax these axes and try to pan or tilt, the gimbal will fight your movement and mess up the shot.

Since the gimbal uses motors to stabilize the camera, it follows that bigger motors are required for bigger gear. Here are some of the most common types of gimbals available:

Mobile phone gimbals are arguably the most common today and they are the first thing that comes to mind when you think of a gimbal.

These are inexpensive and easily accessible for most people to use since smartphones are so common. Now that most modern smartphones shoot really good 4K video, you can produce nearly professional-quality video yourself for very little investment!

Read my review of the Zhiyun Smooth 4 here, one of my favorite mobile phone gimbals.

However, the difference will be in the camera clamp. Mobile gimbals have clamps designed to hold mobile phones, whereas GoPro gimbals will have smaller clamps that will fit action cameras. You will not be able to use one in the other without a special adapter.

Gimbals are also available for dSLR cameras. Naturally, these will be much bigger and pricier, but if you have an application for it, it will be worth the investment.

Say you’re producing high-quality content for YouTube. In this case, you’ll want a really good camera and in order to stabilize said camera, you’ll need a gimbal that can handle it! 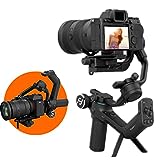 Finally, we have drone gimbals. These are the gimbals found on the DJI Phantom, DJI Mavic, and other camera platforms.

The DJI gimbals are really specialized and have the camera built into the drone. In some models like the Mavic Mini, they’ve been able to use a really tiny camera, so they can get away with using a really tiny gimbal, too!

Separate 3 axis and 2 axis gimbals are also available for using with home-built drones but those are getting harder and harder to find since you really can’t beat the cost and functionality of DJI with something home-grown.

Interested in learning how to film? Check out some great documentary schools

You can use a gimbal for shooting stop motion video

Gimbals vs Steadicams and other mechanical stabilizers

The last thing I want to talk about is gimbals vs mechanical stabilizers.

Mechanical stabilizers have been used for years and they work! However, they involve a lot of mechanical parts like counterweights, springs, nuts, and bolts.

A combination of all of these things effectively eliminates camera shake.

Gimbal motors are just not strong enough to handle the heavy cameras that are used for professional filmmaking. That’s why you’ll still see steadicams and mechanical stabilizers in studios.

If sometime in the future someone makes a motor big enough to carry a large camera, maybe mechanical stabilizers will go the way of the dodo.

Otherwise, professionals will have to stick to Steadicams while hobbyists, Instagrammers, YouTubers, and amateurs can produce really smooth and professional video with their brushless gimbals.

Contents hide
1 What makes gimbals so handy
2 How does the gimbal work?
2.1 Understanding the three axes
3 How to use a gimbal
4 Types of gimbals
4.1 Mobile phone
4.2 GoPro
4.3 dSLR
4.4 Drone
5 Gimbals vs Steadicams and other mechanical stabilizers
5.1 Related posts: